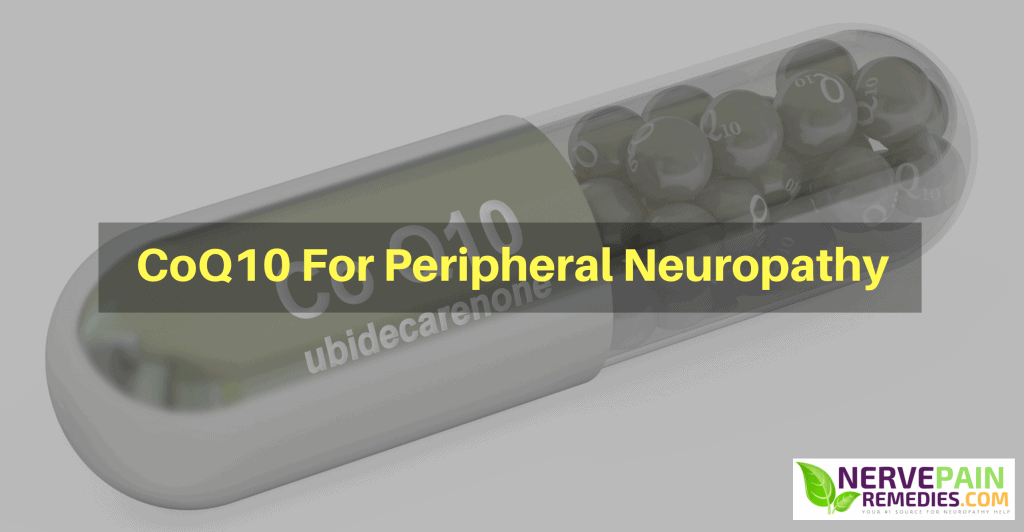 Taking CoQ10 As A Neuropathy Treatment: Here's What The Studies Tell Us

People who suffer from neuropathy may experience various discomforts, including weakness, numbness, and recurring pain. These symptoms usually occur in the hands and feet, though it can affect other areas of the body.

Living with this condition can be painful and uncomfortable. But recent research suggests one possible treatment: CoQ10.

Numerous studies point to CoQ10 having positive effects relating to neuropathy and diabetes. This article overviews the latest scientific studies on CoQ10 treatment as a therapy for neuropathic pain, including the effects and potential risk factors.

Neuropathy is a condition that emerges from damage to the nerves outside of the brain and spinal cord. It can cause many physical discomforts, including numbing or tingling in the hands and feet, chronic pain, and more.

Damage to the CNS can prevent information from traveling through your body. The resulting condition is neuropathy, which can cause numbness and hinder this information network in the body.

There are many potential causes of neuropathy, including traumatic injuries, exposure to toxins, and complications from infections. One of the most common causes, however, is diabetes mellitus. Diabetic neuropathy affects more than half of all diagnosed diabetics. When left untreated, neuropathy can be a highly debilitating condition.

What Is Diabetic Neuropathy?

Diabetic neuropathy is specific nerve damage that can occur through both type 1 and type 2 diabetes. The higher blood sugar (glucose) levels cause heightened stress on the body, leading to widespread nerve damage. It most commonly manifests in the legs and feet, though it can affect other areas.

The associated nerve damage often induces pain or numbness in legs or feet, as happens with most neuropathy cases. However, this nerve damage can proceed to damage your blood vessels, urinary tract, digestive system, and heart. The potential health risks are why you must not take this condition lightly and should seek treatment as soon as possible.

The four types of diabetic neuropathy include:

If you are experiencing any of the above symptoms, you should consult your doctor. There are treatments available that can either prevent neuropathy entirely or significantly reduce your symptoms. One of these treatments is CoQ10.

CoQ10, otherwise known as coenzyme Q, is a compound naturally produced by the human body. Though its name might suggest otherwise, it is not an alien chemical, and it holds a host of benefits.

The predominant benefit of CoQ10 is within the production of energy within cells, though it performs other functions, too. Scientists have yet to understand the real importance of CoQ10. They know that low CoQ10 levels are typical in those with heart disease, brain disorders, and cancer. However, they do not know whether low CoQ10 is a cause or a result of these conditions.

Symptoms of CoQ10 deficiency can include:

Luckily, numerous medications and supplements exist to help boost your CoQ10 levels. CoQ10 is present in foods such as meat, fish, and whole grains. However, they are not in high enough doses to act as a boost for your body. Supplements made for that purpose are available in a variety of forms. These include capsules, tablets, and IV treatments.

Is CoQ10 Good for Neuropathy?

CoQ10 has proven in numerous clinical trials and medical studies to benefit those suffering from type 1 or type 2 diabetes. It is not solely for diabetic neuropathy, either. CoQ10 has shown to improve insulin resistance, high blood pressure, and endothelial dysfunction.

Researchers believe that CoQ10 is beneficial in terms of neuropathy due to its role in reducing mitochondrial dysfunction. It promotes the health of the mitochondria within your cells. By preventing this breakdown, it lessens the likelihood of developing neuropathy symptoms.

CoQ10 also plays a prominent role in reducing oxidative stress, which in turn can promote the health of peripheral nerves. The reason is that CoQ10 has a positive effect on blood flow, allowing for sufficient oxygenation of cells throughout the body.

Furthermore, CoQ10's primary function in the body is to provide energy to your nerve cells. This function is imperative as nerve cells require a higher level of nutrition than most other cells. If you have a deficit of CoQ10 in your body, your nerve cells won't receive the energy they require to function. Over time, CoQ10 deficiency can lead to breakdown and, ultimately, various forms of neuropathy.

Coq10 may even have preventative properties for type 2 diabetes, as well. It assists in the breakdown of fatty molecules. If these fat cells accumulate in mass, they can lead to a myriad of health complications in the long term. There are many positive effects that CoQ10 supplementation can have on the body.

What Do The Studies Say?

There has been extensive research on the relationship between CoQ10 and diabetes. The majority of studies highlight the importance of CoQ10 in the body when it comes to:

Similarly, a 2014 study on a total of fifty patients demonstrated CoQ10's ability to reduce muscle pain. Twenty-five patients received a twice-daily CoQ10 supplementation of 50mg, whereas the remaining 25 received a placebo. Following a period of 30 days, the patients reported on their pain. Findings showed that 75% of the patients taking CoQ10 supplements reported a reduction in statin-induced muscle pain following the treatment.

These results are significant. They demonstrate a positive correlation between the reduction of muscle pain and the reintroduction of CoQ10. This effect may be due to its prominent role in mitochondrial function, which may reduce the metabolic stress that results in neuropathy.

One 2019 study found that CoQ10 liquid supplementation reduced the symptoms associated with muscle pain from statin medication. The group administered the CoQ10 supplements demonstrated a reduction in reported pain when compared to the placebo group.

It is not just muscle pain that CoQ10 can ease either. A study published in 2009 found that CoQ10 levels were significantly lower in diabetic patients than in the non-diabetic control group. This finding highlighted an increased risk of oxidative stress due to increased plasma, which CoQ10 would ordinarily manage. The study emphasizes the potential role of CoQ10 as a powerful antioxidant.

Furthermore, a 2012 study performed on mice found that CoQ10 supplementation prevented the development of neuropathy entirely. We can't apply these results to humans and expect the same results. However, this does consolidate the critical relationship between CoQ10 and the development of nerve pain from diabetes. CoQ10 may perform a similar effect on humans when administered preemptively to people with diabetes.

What Is the Recommended Dose of CoQ10?

The CoQ10 recommended dosage varies widely based upon the condition you treat. In some instances, you may only require a small supplementary coenzyme q10 dosage. In other cases, you may require a significant boost if your body is not producing the compound sufficiently.

Q10 coenzyme dosage usually starts around 60mg, with the CoQ10 max dose usually sitting around 500mg. The highest dosage usually used goes up to 1200mg, but this is for extreme cases. This amount can change based on individual circumstances and the severity of the coenzyme q deficit. One of the most common uses of coenzyme q is to relieve statin-induced muscle injury or liver damage.

Statin medications lower cholesterol levels in the blood. Occasionally, they can interfere with the production of mevalonic acid. This effect directly hampers the production of coenzyme q. CoQ10 can remedy this statin-induced deficiency, as previous studies have shown.

The likelihood of experiencing these side effects is low, but it's still crucial to be aware of them. If you are currently on any medication, consult your usual health professional before starting any supplements as complications may occur. Side effects of CoQ10 are rare but not impossible.

CoQ10 also acts as an antioxidant, which can significantly reduce stress in your cells. This perk is highly beneficial to your overall wellbeing as oxidative stress can lead to a complete breakdown of cells. This breakdown may be the link between chronic diseases and low CoQ10 levels.

Can Too Much CoQ10 Hurt You?

While it is possible to overdose on CoQ10, it is highly unlikely. It is perfectly safe for the majority of adults who take their supplements as directed.

As noted, side effects are possible but rare and usually pertain to specific groups. Coq10 dosage amounts vary broadly between groups.

Some of the at-risk groups include:

If you are any of the above groups, seek advice from your doctor before beginning coenzyme q10 supplements. CoQ10 dosages vary based upon age, overall health, and the specific condition requiring treatment. CoQ10 possesses a variety of positive effects for the body that require varying doses.

Does CoQ10 Affect The Kidneys?

A study published in 2019 found that coenzyme q10 deficiencies linked with those who suffer from chronic kidney disease (CKD). Thus, the implantation of CoQ10 supplements could work to improve the symptoms associated with CKD.

This possibility is primarily due to coenzyme q10's role as both an antioxidant and anti-inflammatory. Oxidative stress and inflammation have both linked to CKD as contributory factors. If the body isn't producing enough coenzyme q10 of its own, the risk of CKD can increase significantly.

There is no evidence at present that an excess of CoQ10 can harm the kidneys in any way. However, paying attention to your CoQ10 dosage is still critical. This advice is especially true if you are taking CoQ10 supplements alongside existing medication.

Further research is necessary before we can say with certainty why CoQ10 has the effect it does in treating neuropathy and diabetes. However, the positive effects CoQ10 possesses are observable in several studies. If you suffer from diabetic neuropathy, it may be worth asking your doctor about coenzyme q10 supplements.