Note: There are several ways to get Methyl B-12 into your diet, but the best way we've found it through supplementation. Click HERE to check out our best B-12 supplement.

Many people who suffer from neuropathy have a deficiency in vitamin B1 and/or vitamin B12. Meanwhile, scientists in Japan have discovered that vitamin B12 is particularly important in the prevention of various neurological disorders, as well as associated conditions. Vitamin B12 is available as an over the counter supplement and is highly affordable.

Vitamin B-12 is part of the cobalamin family. This vitamin is related to the blood's hemoglobin. Indeed, a B12 deficiency often leads to anemia. Cyanocobalamin is the most common form of B12, which is provided to people with a deficiency.

It is now known, however, that the methylcobalamin form is particularly beneficial for people who suffer from neurological disorders like neuropathy. Studies have shown that the methyl B-12 helps to regenerate both the protective myelin sheath around the peripheral nerves and nerve axons, as well as the nerve cells themselves.

A study completed in 1998 showed that over 60% of people with CFIDS has lower than normal levels of vitamin B12 in their cerebral spinal fluids, although levels in their bloodstream were normal. This led to the suggestion that supplementing with non-cyanocobalamin vitamin B12, which was the only form available in 1998, could detoxify the brain. Recently, it was found that methylcobalamin in high dosages would be the best way to achieve this.

Glutamate toxicity is a common cause of brain cell death. While it is an important neurotransmitter, it can also kill cells if it is released improperly. It must be released to the right cells at the right time and in the right amount. By supplementing with methyl B-12, this could be achieved. Indeed, it is now believed that supplementing could protect against various age-related diseases, including stroke and heart disease, including a variety of neurological problems, such as neuropathy.

Scientific Discoveries Relating to Methyl B-12

Recent studies have discovered that supplementing with this vitamin has a number of very important benefits. These are both directly and indirectly related to improving neuropathic conditions. It has been found that people must take their supplements daily in order to experience all the benefits. These include:

A study completed in Germany demonstrated that people who supplemented with methyl B-12 slept less, but that their quality of sleep was greatly increased. In fact, people felt more able to concentrate, more alert, and very refreshed. The study showed that this is because the vitamin suppresses melatonin during waking hours, thereby reducing drowsiness as well. Getting adequate rest is also very important for people with neuropathy.

A Vanderbilt University study demonstrated that there is a strong link between CFIDS and MS. This means that treating one with methyl B-12 may also benefit the other condition. In a study published in the Journal of Internal Medicine, subjects with progressive MS were provided with a daily supplement of 60 mg of methyl B-12. This had no impact on their motor disability. However, there were significant improvements in auditory and visual disabilities. MS is a disorder that affects the nervous system, and many people with the condition also develop neuropathy. Hence, supplementing is again highly beneficial.

In the Oncology journal, a study was published that looked at how methyl B-12 affected a range of different tumors in mice. When administering the supplement for a full week, tumor growth in the ascites, lungs, and liver was significantly reduced. Furthermore, survival rates were increased significantly as well. However, this was only true in mice that had not been irradiated first.

Meanwhile, the Journal of Clinical Immunology had published a study on the impact of the supplement on human immune function. This showed that there were significant enhancements in T-cells, while at the same time improving T helper cell activity. What this means is that methyl B-12 may improve the overall health of people with immune disorders.

Neuropathy is common in both cancer patients and in people with compromised immune systems. Again, there could be a positive impact by taking methyl B-12, both on the illness itself and on the neuropathy. In almost all cases, neuropathy is symptomatic of another underlying illness, after all.

It is a known fact that, so long as the nerve cell has not died, nerves can regenerate. Unfortunately, most people who have neuropathy have nerve cells that have already died, and it is therefore very difficult to regenerate them. However, in a study published in the Journal of Neurological Science, a suggestion was made that methyl B-12 may well increase the synthesis of protein, which is absolutely necessary in the regeneration of nerves. It was demonstrated on laboratory rats that high dosages of the supplement did indeed regenerate nerves.

It may be that patients with various forms of peripheral neuropathy in particular may benefit from receiving ultra-high dosages of methyl B-12. At present, scientists feel that it would require a daily 40 mg administration of methylcobalamin dissolved under the tongue.

It is also common for people with neuropathy to supplement with alpha lipoic acid, which is what the formula Nerve Renew contains. Scientists now feel that those who do, should consider also taking at least 5 mg of methylcobalamin every day, under the tongue. This will ensure that the bioavailability of the alpha lipoic acid is enhanced.

Methyl B-12 is a natural therapy that has the potential to make people live longer and better. There have been some 334 different published studies on the supplement. Yet, strangely, very few physicians recommend that their patients take it. In reality, any neurological condition can benefit from this powerful supplement, even those with conditions such as Lou Gerhig's disease or amyotrophic lateral sclerosis, which has been classed as "untreatable".

Methyl B-12, however, is not a pharmaceutical drug. The result is that the industry is not interested in conducting expensive clinical research. As such, gaining answers on how it works, why it works, and just how effective it is in the treatment of anything from neuropathy to Parkinson's disease, may be a long time coming. That said, sublingual taking of the supplement is easy and affordable and has been proven safe, so people may want to consider self-medicating with it, so long as they inform their physician.

Methyl B-12 should be taken in the appropriate dosage for anyone with nerve issues. There are several other supplement blends available that contain this vital nutrient along with other herbs and vitamins proven to help ease nerve pain and aid nerve regeneration. You can read more in our supplement guide here. 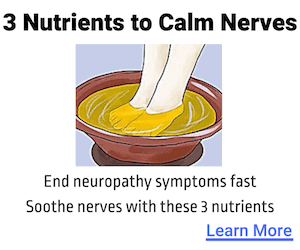